Ice Age Giants is a popular series of investment coins. Its release was announced by the German issuer of the Republic of Ghana, located in West Africa. The theme of the series was the giants who lived in the Ice Age. Such banknotes are a unique opportunity to collect images of animals that lived on Earth long before us, and at the same time to increase capital.

The denomination of each currency is 500 Ghanaian sedis. In total, the series includes 8 investment coins: 4 gold and 4 silver with the same images. You can purchase them from our online store.

Description of the series

The first coin released as part of the series is Woolly Mammoth. For its production, gold and silver of the highest sample were chosen, weighing 1 ounce (31.1 g). The diameter of the money mark was 38.6 mm. The quality of minting is "pruff." The circulation of the product is 1000 pieces.

On the obverse of all the banknotes of the series is the coat of arms of Ghana: a heraldic shield supported by two eagles. Above the coat of arms is a five-pointed star. Below is the inscription: FREEDOM AND JUSTICE, which translates as "Freedom and Justice." Under the symbol there is a line under which you can consider the name of the country and the nominal value of the monetary sign.

On the back of the money sign was one animal, slightly shifted to the right. In the online store for purchase are available: Mammoth, Cave Bear, Irish Giant Elk, as well as Saber-Toothed Cat.

On the site you will find gold coins of the described series at affordable prices. We offer: 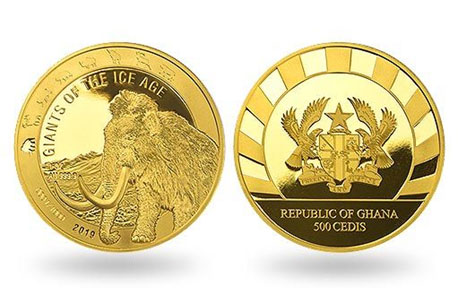 "Giants of the Ice Age. Mammoth. " The animal is represented against the background of glaciers. The beast is captured in full height, and a little to the left of it, in the form of a semicircle, the name of the series is placed: Giants Of The Ice Age. Above the tusks of the mammoth you can see the main characteristics of the coin: weight, sample. Along the top of the canopy are images of eight animals forming the collection. At the bottom of the back is information about the year of issue of the currency mark and the number in the edition. 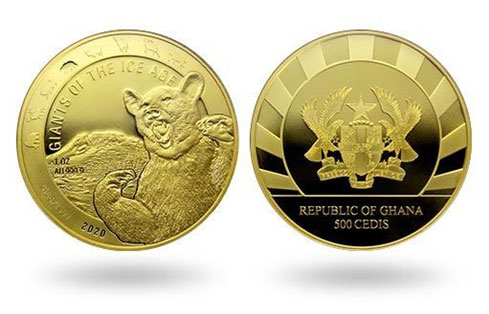 "Giants of the Ice Age. Cave Bear. " On the obverse of the coin is the coat of arms of the Republic. The image is completely the same as that present on other coins in the series. On the reverse is a roaring bear with large claws and fangs. The animal is depicted against the background of its own cave during the Ice Age. 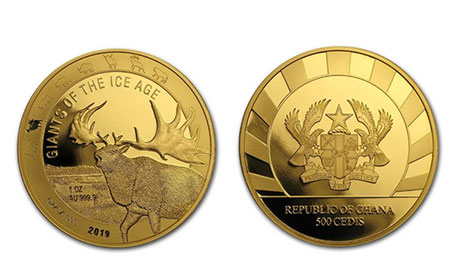 "Giants of the Ice Age. Irish giant moose. " On the back of the coin is a large elk that lived in forests in present-day Ireland. He took his place in the series not by chance - large branched horns, high height and large mass made him one of the most dangerous animals of that time. 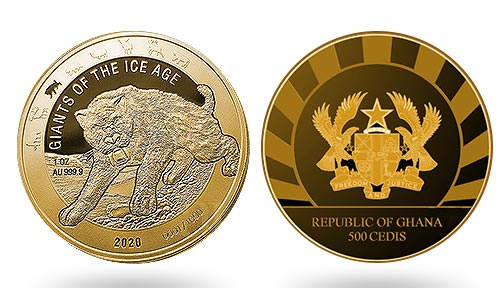 "Giants of the Ice Age. Saber-toothed cat. " On the back of the money mark is a predator with two fangs and a torn mouth, with sharp claws. The saber-toothed cat is captured in an attacking jump, which makes the image more realistic. Such a coin will definitely not be ignored by the numismatists.

In our company you will find genuine coins of the series "Giants of the Ice Age" of the Republic of Ghana. All currency signs are accompanied by appropriate certificates confirming their originality and quality. Each money mark is packed in a special capsule made of durable plastic. Such packaging protects silver and gold banknotes from adverse effects and damage. Its preservation is a prerequisite for the further sale of the coin. Without it, the money sign will not be able to sell at a favorable price. In addition to plastic packaging, a case is attached to the coin, which makes it a great gift.

You can get more information about gold and silver investment coins, as well as order from our managers through the feedback form on our website. Specialists will provide additional information, calculate the cost of the order with delivery to your city.