Gold investment coin "Britain" (Saveren) - the choice of experienced and novice investors. This cash mark is an official means of payment and its purchase is free of VAT and capital gains tax (CGT) for UK buyers. This makes the coin an even better investment, an investment with what is known as a low mark-up.

"Soverens" are one of the most famous coins in the world. In the UK, they own the status of an official means of payment. Throughout history, they have been able to hold attention and not lose interest from collectors, as well as from investors. Buying them is a good addition to any existing portfolio. The very name of the "Sovereign" is an image of the king on the throne with the necessary attributes of power. However, for us, Soveren has become more familiar. From 1817 to the present, the coin is minted from 22-karat gold of 917 samples. A small impurity in the form of copper makes the alloy more resistant to scratches and other damage.

He acquired the status of an investment "Soveren" in 1957. Since then, it began to be released for investors and collectors. In its entire history, it has developed an impeccable reputation. Every year its value grows. This means that now is the time to replenish their collection with them. In our catalog on the KALITA.GOLD website, you will find a piece featuring "Britannia" - a young girl who has personified Britain since the Roman Empire and symbolizes the integrity of the British Isles.

The image of Britain

The Britannia gold coin has not lost popularity since 1987. The very idea of ​ ​ creating it is quite interesting. The UK Treasury set a goal of creating a cash sign that would not be inferior in popularity to the Maple Leaf of Canada and the US American Eagle. A competition was held at the mint for the best design of the cash mark. Of the more than 50 options, one was chosen, authored by Philip Nathan. So Britain appeared - a female figure in billowing clothes, with a coat of arms, a Poseidon trident and a Corinthian helmet. 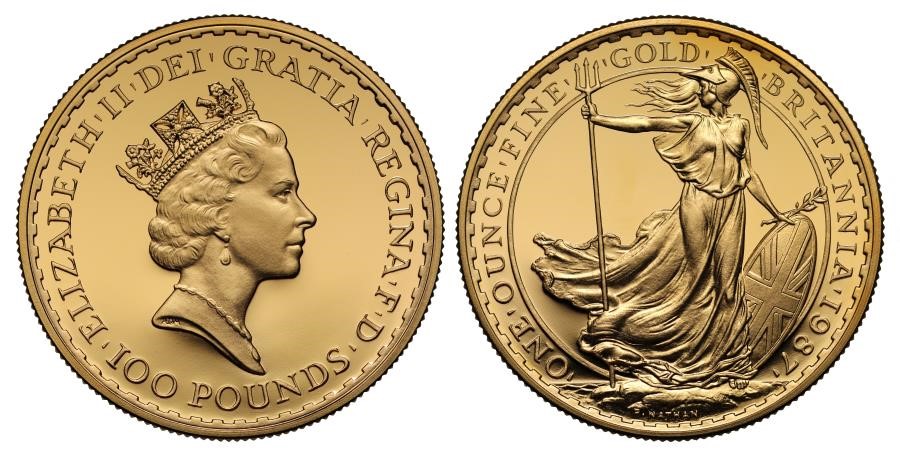 For thirty years, the design of "Britain" has changed several times. The first option was minted from 1987 to 1997. In 1997, a girl with a chariot drawn by horses saw the light. This option lasted until 2009. However, the performance of the girl herself periodically changed, albeit slightly. For example, it was depicted on waves (2008) or with a flag (2011). All this did not deprive her of popularity, but made it more interesting for collectors and investors.

It is worth adding that on the obverse of the money mark is a portrait of Elizabeth the Second. During the 65 years of the Queen's reign, the image was changed only five times.

The golden Britannia comes out weighing 1/10, 1/4, 1/2 and one ounce. In 2013, a one-ounce silver coin was added to the list. The first gold versions had 22 carats of gold (22 parts of gold and 2 parts of copper), had a 917 breakdown. However, in 2012, the composition was changed: instead of copper, silver was mixed, but the sample of the cash mark remained the same.

In 2013, an updated "Britain" was published. The indicator of pure gold in it increased to 99.99%. The pieces, released in 2017, contain one troy ounce of 24-carat pure gold. The new version of the coin, released in 2021, has additional security features, including a hidden image, surface animation, microtext and hue lines featured in the Philip Nathan icon.

Gold "Britain" became the first investment coin in Europe. The dimensions of the coin are 32.61 mm in diameter, as well as 2.70 mm in thickness. On the obverse of the cash badge is a portrait of Elizabeth the Second and a face value of £100. Reverse adorns Britain.

Online store "Kalita.Gold" offers a wide selection of gold investment coins. We sell original banknotes. For members of our club there are special prices. You can get more information, as well as place an order with our managers. Specialists will provide additional information, answer questions of interest to you.